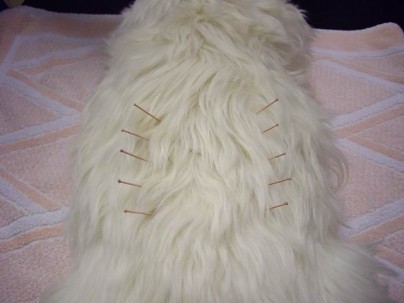 Cat receiving acupuncture for a bad back.

Ken provides acupuncture for a variety of musculoskeletal disorders, both traumatic and chronic (e.g. arthritis and muscle injury). Acupuncture is not successful in all cases, but a high proportion of patients respond very well. It can be used alone but can also be used in conjunction with conventional medication. Sometimes the dosing of this medication can be reduced with acupuncture.
We have had several cases of back pain that have not responded to conventional medication, that did well with acupuncture therapy. 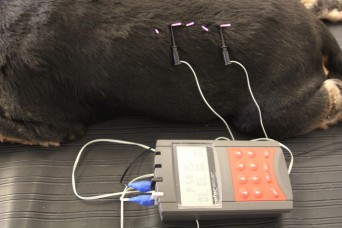 Recently there has been some very good research to explain the possible mechanism by which acupuncture works. The mechanism could involve inhibition of painful stimuli by competing adjacent nerves being stimulated by needling (gate theory), release of endorphins (natural pain killers) and the release of spasms in myofascial planes. If you would like to explore acupuncture treatment for your pet, then contact the surgery to discuss your case, with Ken

Winston suffered severe injuries to both of his hips at a very young age. Following extensive work by an orthopaedic surgen, he was much improved but was likely to need life long non-steroidal medication. Winston's owners enquired about acupuncture, as their previous cat Oliver had done so well on it.
We started Winston on a course of acupuncture sessions and he responded well. Below is the email his owners sent us recently:-

"Dear Ken,
After our conversation last night I thought I'd give you a new guide by which to measure Winston's progress.
He has been out almost the whole day despite freezing rain, minus 5C temperatures and forty seven mph winds. His siblings opted to go in and out but only between showers. Winnie’s also continued his solo decimation and has successfully bumped off yet more voles.
And a first that I have never seen him do before, he jumped down from the top of the pergola ( 8.5 feet tall )over the pond. That is 2.5ft higher than Ollie ever did. Ollie would climb it from the side wall of the pond and jump down to the same wall, but he never jumped down directly onto the paving, but our Winston's gone a bit further( but then he’s not 4yrs old yet).
Not only that, but he's been running round the garden, up onto sheds, then trellis and garage roof, conservatory roof and across kitchen roof etc, so quickly that I couldn't even take a video to show you!! I really did try but no luck so far.
When I do I’ll send it to you, honest I will.
Friends who saw him after he got back home, after his accident, are absolutely stunned at how good he is now. Even our neighbours are amazed at how well he is now and have commented that you’d never think he’s been so badly injured. He just looks like a normal young male Norwegian Forest Cat’.
I’m so glad that you were prepared to treat him and I really hope that you and the rest of your team, know how much we appreciate your attention and care.
Many thanks, Jo and Claire"