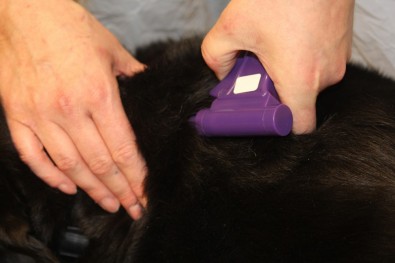 Since 6th of April 2016, all dogs are required to be microchipped and registered to an approved database by the time they are 8 weeks old.

Contact the surgery to arrange for your dog to be micro-chipped if they have not had it done so far.

A dog's breeder is the dog's first keeper

The breeder will be considered the first keeper of their litter of puppies and it will be their legal responsibility to get their puppies' microchipped and recorded on a database compliant with the new regulations, such as Petlog. The breeder may not record the new owner as the first keeper of a puppy instead of themselves and it will be an offence if they are not listed as the first keeper of their puppies on a microchipping database compliant with the regulations, such as Petlog.
The maximum age a puppy can be microchipped under normal circumstances is eight weeks old

There is no minimum age specified in the regulations. However it is advised that microchipping does not take place before the puppy is 6 weeks old, and it is a requirement that the puppy is microchipped and recorded on a database that is compliant with the new regulations, such as Petlog, by the time it is 8 weeks old. Therefore between 6 weeks and 8 weeks is the optimum time to get the puppy microchipped, with 8 weeks being the legal maximum (unless an exemption applies).
There are two exemptions to the microchipping regulations

The first exemption is where a veterinarian has certified the dog as a working dog and docked its tail in accordance with the Animal Welfare Act 2006. In such cases the time limit for the dog to be microchipped and details recorded with a database is extended to 12 weeks. The dog can be passed on to a new keeper once it has been microchipped. This exemption is applicable in England and Wales only as tail docking is completely banned in Scotland.

The second exemption is where a veterinarian certifies that a dog should not be microchipped because it could adversely affect its health. In such cases a vet would have to certify that this was the case and state when the exemption expired. The dog would then need to be microchipped on the expiry of that time limited certificate unless a veterinarian issued a further exemption certificate because of ongoing concerns with the dog's health. In this case the decision to exempt a dog from being microchipped would be made by the veterinary surgeon. In such a case a breeder may pass the puppy on with a copy of the veterinary exemption certificate and any time limit for microchipping though it would be for the puppy buyer to decide whether to take the dog given this information.
Mini microchips are available for small breeds

There are mini microchips available (the same standard and performance of the existing chip) with a smaller needle for implantation. Use Petlog's 'Find a Petlog Implanter' www.petlog.org.uk/findanimplanter to find a local implanter and speak to the implanter about your options.
Only those who have been suitably trained may implant microchips

a veterinarian, student veterinarian or veterinary nurse acting under the direction of a veterinarian
someone who has been trained and assessed as competent under a training course approved by the Secretary of State
someone who has had training including practical experience of implanting microchips prior to the Regulations coming into force

Those already implanting microchips into dogs before the regulations come into force may continue to implant microchips provided they have received training that included practical experience of implanting a microchip.

Breeders may microchip their own puppies only if they comply with the above requirements.

NB: It will be unlawful to buy microchips online and implant them unless the implanter has had the training specified above. The instructions for implanting on-line bought microchips will not meet legal training requirements in part because there will be no practical implantation training included.

It will be an offence to implant microchips without the appropriate training and a fine of £500 could be imposed for doing so.
Standardised information about each dog and its keeper must be recorded on a microchip database.

The breeder's licence number and the name of the local authority by which they are licensed (if relevant)
The original name given to the dog by the breeder
The breed of the dog, or a description if it is a crossbreed
The sex of the dog
The colour(s) of the dog e.g. blue, brindle and white
The most accurate estimate of the dog's date of birth which the keeper can give. If the keeper is the breeder then the exact date of birth should be known
The full name and address of the keeper (including the full postcode)
The contact telephone number(s) for the keeper
The name given to the dog by the keeper if different to those already recorded
The unique microchip number (NB: This may be found on the registration certificate issued by the database operator)

If the breeder or subsequent keepers of the dog do NOT update the dog's details on a database that is compliant with the regulations, such as Petlog, then a notice may be served requiring the keeper to microchip the dog within 21 days of the served notice. If this notice is ignored then a fine of up to £500 can be issued or an enforcer can seize the dog and microchip it at the keeper's expense.
Liability for a dog in circumstances in which the new keeper does not update the microchip database with their details and the dog strays or is involved in a dog bite incident lies with the new keeper

As soon as the dog is transferred to a new keeper they become liable for that dog. The new keeper should ensure the contact details on the microchip database are up to date when they acquire the puppy. The new keeper's details can be updated either by the previous keeper/breeder, or the new keeper.

Once database records are updated with the new keeper's details it will also ensure the previous keeper cannot be held liable for any problems the dog may cause under the new keepership.
Compulsory microchipping is not proof of legal ownership

Microchipping shows who the current keeper of the dog is but this alone is not proof of legal ownership. A microchip relates to the main keeper of the dog i.e. the person the dog lives with and to whom it should be returned if found.

Legal ownership of a dog is undefined. In cases where there is a legal dispute over dog ownership, many factors will be considered including perhaps the keeper and KC registered owner of the dog, but also who pays for the dog's upkeep, veterinary treatments etc. and who pays for insurance for the dog for example. Ultimately it will be for a court to decide ownership
Any microchip that fails, migrates or causes any adverse reactions must be reported to the VMD

Microchips can fail, migrate and cause adverse reactions but only very rarely. In England an Adverse Reaction Reporting System has been set up by the Veterinary Medicines Directorate (VMD) and anyone finding an adverse reaction or a failed microchip must report it to the VMD at: www.gov.uk/government/publications/microchip-adverse-event-reporting-scheme

In Scotland and Wales anyone finding an adverse reaction or migrated or failed microchip must report it to the Scottish Ministers and Welsh Ministers respectively.

If unsure, seek veterinary advice.
The Kennel Club supports the introduction of the new regulations

The Kennel Club and Petlog have assisted local authorities in advance of the regulations coming into force by donating a scanner to every local authority in England, Wales and Scotland. We also run National Microchipping Month to raise awareness amongst Petlog customers of the need to keep their details up to date and for the wider dog owning public to encourage them to microchip in accordance with forthcoming regulations.

Microchips are used to identify many species, including horses, tortoises, cats and dogs. They help us re-unite lost pets with their owners. Chip insertion is performed while you wait, or can be done when under anaesthesia for a procedure.

Our microchips can be read by all scanners, both in the UK and abroad.

Cat flaps and feeders are sold which are activated by a microchip. It is important the chip is placed high enough in the neck of cats to allow these to function.

Please ensure that your details are kept up to date, should any changes in your address or phone numbers occur.